March, the month of expectations!

March this year looks as if it is coming in like a lamb, with gentle temperatures and warmer days, so let us hope that it leaves us equally as calm with many positive memories. We certainly need this during a climate of the Coronavirus, which in its aftermath has left much sadness and devastation.  Yet we also know, March is a changeable month with warm spring – like a days or passing snowstorms! Such is the balance between the weather and life!

When looking for the important events of March, besides the farmers’ anticipation and ancient folklore, we have much to look forward to. There is another focus during this month: a cause for celebration, reflection and expectation.

We burst into March with the image of “a host, of golden daffodils,” to mark one of our National Days – St David’s Day.

This month is shared by many causes and dedications for good will and care of the earth:

March 22: World Water Day: Celebrated first by the UN (1992) to make people aware of the importance of fresh water and the use of sustainable practices

March 23: World Meteorological Day: when “climate change” was first raised in 1950. These are just a few dates to mention good will and dedication.

For many throughout the world, March 8 is also known and loved as International Women’s Day. It was first celebrated in the UK in 1801, after industrial developments and the quest for working rights for women in the mills and factories.  In the United States, the rallies and marches for votes for women in New York, made some stirrings, resulting in critical debates and political unrest. In 1808, the movement for women took on a momentum in the world, with the symbolic colour purple to represent women all over the globe.

Here in the UK, the women’s suffragette movement and news of the arrest of Sylvia Pankhurst spread across the world and many countries began to recognise the need for change. It was not until 1977, that the United Nations adopted a resolution to proclaim United Nations Day for Women’s Rights and International Peace, to be observed by Member States, “in accordance with their history and traditions.”

By 2000, there was little activity, as the rise of feminism was not so popular, and many women’s activities and platforms for renewal and awareness clouded the special day, March 8. This date marked many years of dedication, suffering and determination of women across the globe to seek recognition for their place in the world.  In 2001, there was a new energy to involve all countries to organise their own day, with prayer and gatherings, all with themes relating to their own culture and aspirations.

This year, 2021, churches, organisations and women’s groups, in 140 countries, will mark this day, March 6: Women’s World Day of Prayer, to pre-empt International Women’s Day. This year, it will be led by the women of Vanuatu, with prayers, celebrations and a shared culture to bring awareness to the world, not only of aspects of discrimination, inequality, poverty, enforced prostitution, trafficking, cyberbullying and trolling, but to enhance the magnificent place women hold in the world: Leaders of many Nations, Olympic Medallists, world renown entertainers, business entrepreneurs etc. But, for the women of the South Pacific, this day will celebrate fantastic mothers, farmers and role models. 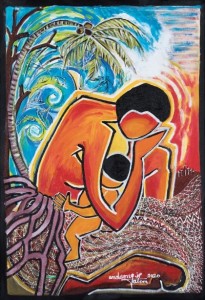 The women of Vanuatu have chosen as their theme:

Build on a Strong Foundation.

These Melanesian women of the archipelago of eighty Islands of Vanuatu, will share their history and culture, giving thanks for their pristine environment which they protect and preserve. This celebration can be found on the Internet with the full Service of Prayer.

March is going to be a great month of possibilities and expectations, as it begins with warm spring-like weather, we live in anticipation that these days will enable us to journey together with remarkable women from all over the world and rejoice with them in a common prayer. For those not so fortunate, we will be reminded to carry them in our prayers and thoughts throughout the month.

Let the words of William Wordsworth fill us with expectation and HOPE as we embrace the calm beginnings and images of Spring:

In vacant or in pensive mood,

They flash upon that inward eye

Which is the bliss of solitude;

And then my heart with pleasure fills,

And dances with the daffodils.

I wandered lonely as a Cloud, William Wordsworth (Intro, Antonia Till, 1994.