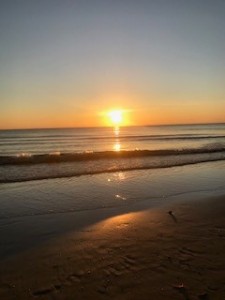 Meeting grows half a sorrow because of parting again.

When shall the day break that these things shall not be?

When shall new earth be ours without a sea,

and time that is not time, but eternity?

To meet, worth living for; worth dying for, to meet;

to meet, worth parting for.  Bitter forgot in sweet;

to meet, worth parting before, never to part more.

Christina Rossetti was an English poet born in Victorian England, who would have been in London during Euphrasie’s first years in England with the Sisters of Compassion. Despite Christina’s Italian background and family life which was secure and produced some very famous poets and artists, including her brother, the poet Dante Gabriel, she suffered greatly from anxiety and concerns about the world. Like Euphrasie she would have experienced and been influenced by the Anglo-Catholic or Tractarian Movement of the Church of England which inspired much of her religious verse and sentiment. Her sister Martha became an Anglican nun and during this time they experienced hardship when their father, a notable professor, became seriously ill. As a young woman, Christina suffered from a breakdown but her grandfather supported her writings and poems and her first publication in 1847 was just before Euphrasie arrived in Great Titchfield Street, London. Her works as well as being a sharp observation of the modern world were also touched with a pathos often leaning on a sentimental approach to the world and relationships.

Her poem Parting has been often on my mind over these months of loss. We are all experiencing various kinds of “loss” during this time of an unprecedented pandemic situation throughout the world. Rossetti was always thinking of death in many of her works and her own personal loss in relationships was paramount in her poetry. Loss around the Congregation has touched us all. During these months we have, somewhere across the Congregation, lost someone and not been able to say goodbye or to even lay them to rest. Even as far as meeting and gathering has, for many, been impossible; that parting expressed by Rossetti has been a reality for us too. As often as it has been said: Absence makes the heart grow fonder, that certainly has been the case for many – especially as we will not see our loved ones this summer, return to our country of origin to visit familiar places. But, tainted with a different approach to the world, we are grateful that our communications have been possibly more frequent and more meaningful through regular Zoom or phone calls.

So, unlike Rossetti, our hopes are:  that one day this will be behind us. We try not to dwell on the negative but to make good of the times we have now. We will meet again and it will be “to meet worth living for”. . . “to meet worth parting for.”  A new Dawn