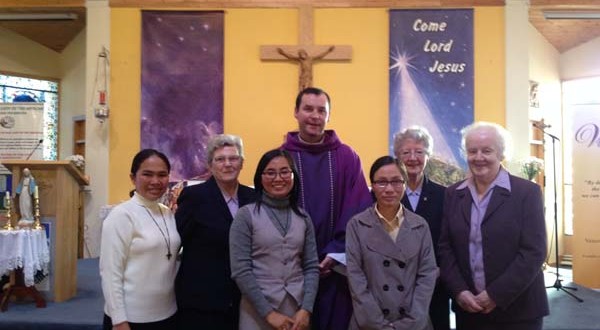 Most of us associate the words ‘a call’ with a vocation to the Priesthood or the Religious Life, but in fact we are all called through our Baptism and our Confirmation to be witnesses to God in the world. How we do that, is different for all of us, you as married or single, and us as Religious or Priests. Pope Francis reminds us that ‘a vocation is a response to a call, a call of love’. It is an ongoing journey, where we live the joy of the Gospel in our daily lives, and bring that joy to others. In this year, specially dedicated to Consecrated Life, we think of the wonderful contribution made by Religious orders down through the years to the life of the Church. Think of the Presentations here, the Mercy’s, the Franciscans, Dominicans, Our Lady of the Missions, and all the other great Orders that took responsibility for education, nursing, social welfare, care of the poor and other pressing needs of the time. Many set out as missionaries to far off lands, spreading the gospel and witnessing with vision, energy and courage. (We wouldn’t have our srs. Linh, Mercy and Trinh here, today, except for those early evangelisers, who set up foundations in their countries.)

Our own Congregation was founded in Lyons, France on Christmas Day1861. Our foundress, Euphrasie Barbier, always wanted to be a missionary, so she joined a missionary Order called, The Sisters of Calvery. Unfortunately for her, they soon gave up their missionary idea, so very disappointed, she left them to found her own Congregation.

Her concern was for the poorest and most abandoned, especially the education of women and children. After Vatican 2, education was interpreted in a broader sense to include nursing and social work of various kinds. In this regard, we are similar to other orders, including The Presentations, who also branched out into other works and opened missions in foreign countries. You might ask, Why then have different orders of religious, if their members are doing the same work, more or less? Well, every order has its own unique charism or spirit by which it is identified. For example, the Presentation charism is represented by a lantern. This symbolises the journeys made by the foundress, Nano Nagle by night, in search of poor children to care for and educate. Our own charism is represented on the display board, by the Icon of the Trinity. This symbolises the gift we receive, of sharing  in the life of The Trinity, through our unity, and in the mission of Jesus. He was sent, as we are, to proclaim the good news and he gave Himself back to The Father in total self gift. Pope Francis says that our journey through life is ‘one of coming back to God and becoming more deeply one with Him’ The three elements of our charism, then are, to live in contemplation  with God, in union with one another and in mission, by befriending others and caring for the earth.

During the Franco Prussian war(1870-71) when convents and churches were burnt down in France, our convent was saved, by being turned into a hospital for wounded soldiers. Having to leave France, our foundress set about establishing new missions in New Zealand, Australia, Tonga, Samoa, Canada and England. Other foundations followed after her death, in India, north Vietnam, and elsewhere.

The very first Irish girl to enter our Congregation in 1867(over 100 years before we came to Ireland) was 14 year old Elizabeth Conachy from Castlebellington in Dundalk. Despite her youth, she was very gifted and was soon put in charge of different convents throughout New Zealand. She took the name of Sr. Gabriel and accompanied our foundress during her visit to New Zealand. Crossing a deep gorge in 1886, their stage coach was involved in a serious accident. Both were badly injured. Strangely enough, both died 7 years later within a few months of each other. Sr. Gabriel was only 39 years of age.

A few brief words on my own vocation, and then Mercy will tell you how she came to enter our Congregation. The Presentation sisters will be surprised to hear that my story is linked up with them! I attended the Presentation school in Oranmore, Co. Galway, but sorry to say, I was not a diligent pupil! I mitched quite a bit and generally wasted my time and theirs. Despite all that, I felt drawn to joining them. My opportunity came one day, when the subject of  vocations came up in class.  I was all ready to surprise, when the sister jumped from the pupil on my right to the girl on my left, saying, ‘We all know you wouldn’t be interested, anyway, Una!’ My moment was lost. All I could think of was, God does not want me there.

At 18 I went nursing in England and there I met 2 nurses, whose sisters had joined our order. One of them must have given me a bookmark on it, because when I opened my Bible to look for some direction, the bookmark fell out. I saw it as a sign that I was meant to try my vocation, there. It was a teaching order, so I left the nursing and trained for teaching. I spent most of my life teaching in our own secondary school in  Churchtown,  except for one year teaching in England, 6 in Africa and 8 in rural parishes, helping in sacramental work. One of my pupils was Mary Loo Mc Donald,  I was chuffed when she wrote that I was her favourite teacher at Notre Dame school! Now Mercy will tell you a bit about her vocation.

We live in a time of crisis for Religious Life, but God will never be without witnesses. Pope Francis calls on the whole church to be missionary disciples. George Bernard Shaw described life as ‘a sort of a splendid torch, which I have got hold of at the moment, and I want to make it burn as brightly as possible before handing it on to future generations’ There is danger that we might waste time lamenting the past, while neglecting present opportunities. 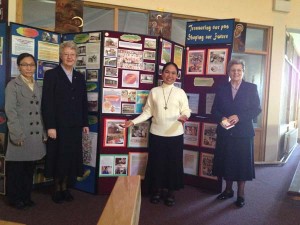 We, ourselves are blessed with many young sisters, particularly from Asia and Africa. We have made new insertions in Orissa, India, on the boarders of Thailand and with women and children living with H.I.V.in Kenya. Other  new Missions had been opened in South Sudan, Laos, Taiwan and Kazakhstan (Central Asia) To day, the particular contribution of Religious in the quality of their lives. They are at the service of Christ and the Church. Pope Francis adds ‘Jesus at the centre of our lives, not ourselves.’ God is still calling people in all ages and of all ages; people who are led by the spirit and are convinced they can help change the world. Maybe some of those people are here.

Many thanks for listening and thanks again to Fr. Burke.