Spring – a Season for Rising

Now the green blade riseth from the buried grain.
Wheat that in the dark earth many days has lain,
love lives again, that with the dead has been;
love is come again like wheat that springeth green.

For most of us, the first signs of spring this year will make a difference. It has not only been the seasonal weather that has coloured our lives for the past year, but also the fact that we have been forcibly confined into a world of blurred vision – disbelief, uncertainty, anxiety, shock, despair and for many, grief. It has been like planting a seed and nothing appears. “A seed “that with the dead has been” and remained there. Day after day, we have been checking on our TV channels to see any signs of change, new life, just like the farmer, but alas – it’s just that void of nothingness that has moved us from one month to one year – and it still goes on. 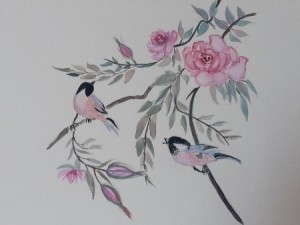 None of us have seen anything like this before – as one news reporter said as we marked one year of lockdown, March 23, “we all are on the cusp of something that would change our lives”! In fact, none of us can really say that life has been normal since that day when we realised that something had overtaken the world to bring it to a halt!  However, one thing has not changed, that is the liturgical cycle of the Church and other faiths around the world. Their clocks keep ticking over and continues to move in and out of Liturgical, religions seasons. Even despite climate change, nature’s clock carries on. We have battled through snow, frost, rain, winds, storms and now, to brighten our hopes, “love is come again.” Our bare glens, moors, hedgerows, heathlands, gardens and pathways are sprouting forth. Birds are making nests and opening and closing our days with chatter. (Painting by Dinh Thi Thanh Thuy, rndm).

April is a time when the seasons make a drastic change – from dark nights, wintry days to the more unpredictable spring-like weather: longer days scattered between showers, winds, and even light snow! This year we can really align our thoughts to T.S. Eliot and Geoffrey Chaucer, who both believed that:

“April is the cruellest month, breeding
Lilacs out of the dead land, mixing
Memory and desire, stirring
Dull roots with spring rain.”

The complete Poems and Plays of TS Eliot, Faber, 1969.

Both writers were aware that April was full of uncertainty – Chaucer in his Canterbury Tales sees this is not the best month for pilgrims and talks of regeneration of the land after a long winter. This can be a painful time for farmers as they look back to better or fertile lands and a happier past. For us, likewise, our winter has been long and we have almost forgotten good times. For Eliot, after the First World War, he sees nothing but destruction, so that his poem almost opens as an epigraph for the dead, even using the Anglican Burial of the Dead as his title. But as we move with the liturgical cycle we can see glimmers of hope to help us cope with today. Even Eliot writes: This winter “kept us warm . . .” and “Summer surprised us . . .”

In the midst of a decayed and withered post war culture and society, he sees new life and a promise that will not expire: but he, like us, will be forced from thereon to live with reminders of former glory.

This is a truth we live with today. With all that has gone on for the past year, we can either wither, cradle our losses or, we can rise to a new place. Macrina Wiederkehr, in her book, The Circle of Life (2005) advises us that during this time of April/Spring, we take a little time to meditate on the “return of life.” Ask ourselves: how do you feel?  How are you? “How are we, like buds of the earth, opening to God and to others?”  During this time of lockdown and isolation what secrets “buried deep in the soil of [our] soul are being revealed to us?” What gospel message during this season do we hear these days – what is unfolding for us – how can we grow from all of this? How has “love come again” to give us the courage to blossom/springeth green?