FOR the Year of Consecrated Life, Sr Una Rutledge, from the Notre Dame Convent on Churchtown Road, discusses her vocation, the charism of her order, the foundress of the order, and how she sees the future for her order.

SR UNA was in her late teens when she first heard the call: “I felt that God was calling me to give my life to His service,” she explained. “It wasn’t that I wanted to join a particular order, or do a particular work, or go on the missions (as others wanted), I just felt that I was being called to give the gift of my life to God, and I did not think it mattered which Congregation I joined, or what work I did. I felt I would have no peace of mind until I followed the call.

“As I went to school to the Presentation Sisters, I thought I might join them, but they did not consider me a likely candidate, because I was too fun-loving and a time-waster. I decided that God did not want me there.

“At the age of 18, I began training for nursing in England. There, one of the nurses gave me the address of her sister, who had joined a convent in Hastings. It was a teaching order, so it meant giving up my nursing, but I did that, and joined my present congregation.

“After my novitiate in Hastings, I was sent to our convent here in Notre Dame, where I taught for most of my life. Several of my pupils are now household names, eg, Mary Lou McDonald.

“I spent one year teaching in England, six in Kenya, East Africa, and eight years after my retirement working in rural parishes, where I helped in Sacramental programmes.

“At the moment, I am on our local team with two other Sisters, in charge of a large community. Each year we welcome students from Asia and Africa to facilitate their study of English, and to enable them to pursue their higher academic studies.”

The  Sisters of Notre Dames des Missions, like every other congregation, has their own unique charism, or spirit, by which they are identified.

“Ours is Trinitarian in character,” explained Sr Una, “because our foundress’s spirituality and understanding of mission came from her contemplation of the Divine Mission of the Trinity – the Father sending the Son into the world, and the Father and Son sending the Spirit.

“We share in the life of the Trinity, through our unity, and in the mission of Jesus. He was sent, as we are, to proclaim the Good News and, like Him, we give ourselves back to the Father in total self gift.

“The three elements of our charism then, are to live in contemplation with God, in unity with one another, and in mission by befriending others and caring for the earth.

“My work incorporates our charism, because I do not choose my work. I am ‘sent’ like Jesus on a particular Mission, whether at home or on a Foreign Mission. There is dialogue involved, so as to achieve the best outcome.

“Contemplation and prayer run though my day. We have morning and evening prayer in common, and adoration of the Blessed Sacrament each day. This puts me in touch with the life of the Trinity.

“I also live in a community, where all the members try to get along well with one another, in imitation of the harmony that exists in the life of the Trinity. Of course, we often fall short of the ideal and need to be reconciled with one another.

“In general, though, our charism is lived out with joy and enthusiasm, which is remarked on by those who visit the Convent.”

The foundress of the Notre Dame order was Euphrasie Barbier (Mother Mary of the Heart of Jesus), who was born in Caen, Normandy, in 1829. “She had a great longing to work on the missions,” said Sr Una, “but there were few missionary orders for women at that time. She joined the Sisters of Calvary, but left them when they gave up their missionary intention.

“After many setbacks, she founded her own Congregation on Christmas Day, 1861, in France. During the Franco-Prussian War (1870-1871), many churches and convents in France were burnt down. All religious had to leave the country, but our convent was saved by being turned into a hospital for wounded soldiers.

“Our foundress took the opportunity to establish new missions in New Zealand, Australia, Tonga, Samoa, Canada and England. The first Irish girl to enter the Order was Elizabeth Conachy from Castlebellingham, Dundalk, in 1867, before we had a convent in Ireland.”

Worn out by her many missionary journeys, and never in good health, Mother Mary died in 1893, and was buried in Sturry, Canterbury. However, her good work continued, as new missions were set up in India in 1920, and North Vietnam in 1924, while other foundations followed in Scotland, Wales and Ireland.

“Mother Mary’s concern was for the poorest and most abandoned,” explained Sr Una, “especially the education of women and children. After Vatican Two, Education was interpreted in a broader sense, to include nursing, and social work of various kinds.

“As Sisters retired from formal education, other ministries were undertaken – parish ministry, sacramental work, special education, education of travellers, and one Sister became a diocesan adviser for Religious Education. Today, various parish groups join the Sisters for prayer, here in Dundrum and in Dundalk.”

Finally, how does Sr Una see the future of the Notre Dame order? 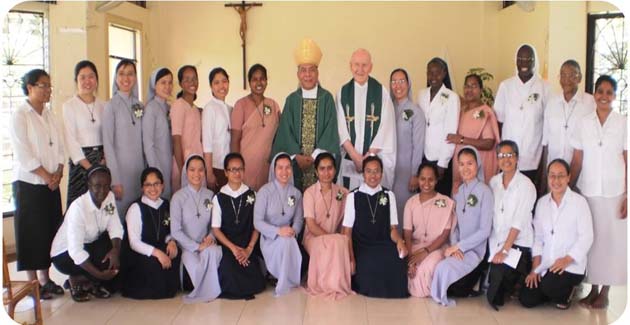 “We live in a time of crisis for Religious life. With a decline in vocations in the West, and the increasing age of our religious, the focus has shifted to the East, where our Congregation is blessed with many young Sisters, particularly from Asia and Africa. Today there are more than 900 Sisters in 26 countries in Africa, Asia, Europe, Latin America, North America, and the Pacific.

“Over the past three years, in response to new and urgent needs, new insertions have been made in Orissa, India, among the mountain tribes in Vietnam, and with women and children living with HIV in Myanmar (formerly Burma). New missions were opened in Southern Sudan, Laos, Thailand and Taiwan.

“Here in the West, some of our Sisters are still in active ministry, but our particular contribution is the quality of our lives, as Pope Francis urges Religious: ‘Jesus at the centre of our lives, not ourselves’.”